The S&P down 31 points. The Dow down 265. The Nasdaq down 68. Are we surprised? I don’t think so, but let’s look at my previous Chart School newsletters:

The charts above are from my Chart School newsletter “Back to bull, or still a bear?” (For review, go to https://themeshreport.com/back-to-the-bull-or-still-a-bear/) We knew that the 50-day SMA had recently crossed below the 200-day on the S&P 500. We also knew that the 50/200 crosses tend to be a reliable sign of trend change, in this case from up to down. Next:

We noticed this pattern forming on the S&P. This wedge tends to be a bearish pattern in a downtrend (For review, go to https://themeshreport.com/driving-a-“wedge”-between-bulls-bears/) Although we could have just as easily broke through the topside resistance, the weight of the evidence seemed to hint otherwise. Today seems to have validated that stance. And finally: 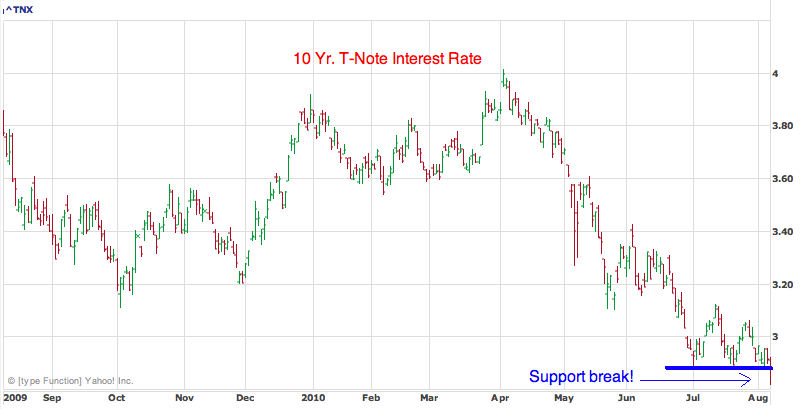 There is a correlation between rates on the S&P (For review, go to https://themeshreport.com/as-rates-go-update/) As you can see from the 2nd chart above, rates recently broke a key level of support. If rates were going lower, we have every reason to believe the markets would go lower also.

The Tale of the Tape: In previous days & weeks we have seen hints to a potential downside reversal. The 50/200-day SMA crossover told us there was a likely trend change. So, we probably wanted to look at the last 6-week market rally with skepticism. The market was forming a common bearish price pattern in the form of the rising wedge, thus the clock seemed to have been ticking. Finally, rates broke lower last week, which lately means the market will follow. It would appear that all the advance evidence told us that a sell-off might be coming.

Today’s break below the 200-day SMA, and break through the bottom support of the wedge pattern outlined above, tells us to expect lower prices. It would be advised to pull back on long positions and looking to enter short positions moving forward. Market conditions can always change, but until they do, lookout below!