To analyze BJ’s Restaurants’ stock for potential trading opportunities, please take a look at the 1-year chart of BJRI (BJ’s Restaurants, Inc) below with my added notations: 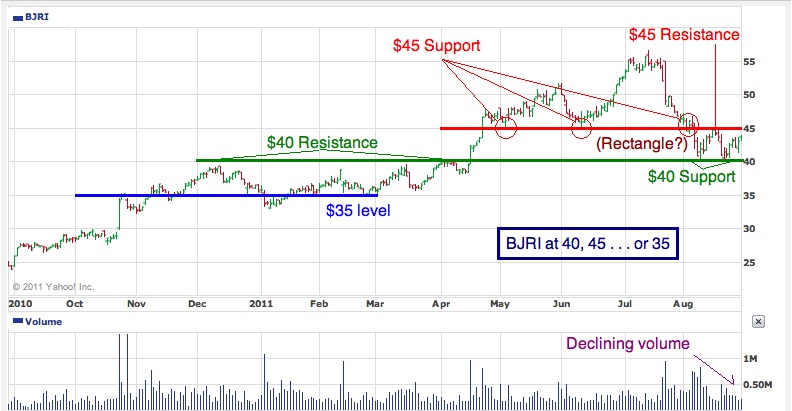 As with yesterday’s SFLY, BJRI could be in the process of forming a common chart pattern known as a Rectangle. The pattern is being formed with the combination of the $40 support (green) and the $45 resistance (red). The $50 level was also important as support in May, June and July. If this pattern is in fact forming, the same declining volume that SFLY had is also in place with BJRI. Some traders will watch this pattern to see which way the stock breaks, either through the $45 resistance or below the $40 support, before entering a trade. More active traders could look at additional trading opportunities at $45 or on another pullback to $40.

The Tale of the Tape: Whether or not a potential Rectangle pattern is being formed, BJRI is trading within the range of two important price levels at $40 and $45. Long trades could be made if BJRI breaks through the $45 resistance or pulls back to the $40 support with a stop placed below the level of entry. Or, short plays could be made on a rise to $45 or on a break below $40 with a stop placed above whichever level is entered. If BJRI were to break below $40, the next level down for a long trade would be at $35 (blue).